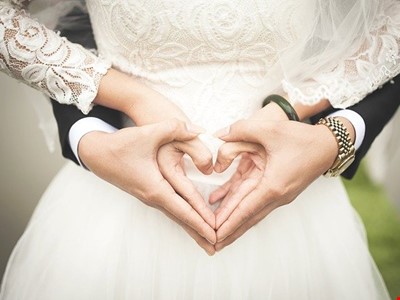 If you would like to be married in one of our temples (Basilica – Collegiate Church of St Peter and St Paul, Rotunda of St Martin), you must give at least four months’ notice in advance to allow the necessary preparations to be made. Please contact our parish staff.

In the Catholic Church, marriage, also known as holy matrimony, is the covenant by which a man and a woman establish between themselves a partnership of the whole of life and which is ordered by its nature to the good of the spouses and the procreation and education of children. A marriage between a baptized man and a baptized woman has been raised by Christ to the dignity of a sacrament. Catholic marriage is regarded as a free mutual agreement or contract that must be validly executed by the spouses. It is the spouses who are understood to confer marriage on each other. The spouses, as ministers of grace, naturally confer upon each other the sacrament of matrimony, expressing their consent before the Church. The priest has merely the role to assist the spouses during the ceremony in order to ensure that the marriage is contracted in accord with canon law. He also prays to God for grace for the couple.

Two people get married when they have freely decided to live together and start a family. A valid marriage is not possible if one of the spouses imposes any exclusive conditions (e. g. we do not want any children, etc.). In a Catholic church only baptised persons can be married. An exception can be made if one of the partners is Catholic and the other is a member of another Church or is not baptised. If neither of them is a baptised Catholic, a church wedding is not possible.

The Roman Catholic Church considers marriage to be a unique, lifelong and inseparable bond between a man and a woman, based on unconditioned love and total mutual commitment until death and ordered to the good of both spouses and their children. In the Roman Catholic Church (to which all our churches belong) it is therefore possible to get married if: (I.) the spouses are free to marry; (II.) they freely exchange their consent; (III.) in consenting to marry, they have the intention to marry for life, to be faithful to one another and be open to children; and (IV.) one of them is a Catholic. Their consent must be given in the canonical form, i.e., in the presence of two witnesses and before a properly authorized Church minister. Exceptions to the last requirement must be approved by Church authority (cf. canons 1055–1165 of the 1983 Code of Canon Law).

A special situation occurs if one or both partners are divorced. The Church treats marriage with great respect, and so it does not allow any further church wedding, even after the previous valid marriage was divorced. Nevertheless, we suggest contacting us in such a case and consulting the situation.

A marriage is an important step in life not only for the spouses, but also for their families and even for society as a whole. Therefore, a wedding is not only a private event, but also – from the point of view of the state – a legal act. For this reason, it is necessary to visit the local register office at the venue where the wedding is taking place and fill in the relevant forms before the wedding ceremony. The Roman Catholic Church, too, keeps records of the wedding. Before conducting the marriage the couple must show their birth certificates, ID cards, and an updated certificate of baptism (not older than three months to the date of the wedding) to the Church employee who is person in charge.

As the marriage is a crucial step in life, it proves to be very important to do careful preparation before the wedding ceremony. This usually involves several individual meetings within the parish, with the celebrating priest, and there are also offered joint preparations for several couples at once.   It is always necessary to arrange this step with the celebrating priest (marriage officiant). Thus, the wedding should be planned well in advance (several months before the ceremony).

The couple who would like to arrange a church wedding in one of our churches (Collegiate church of St Peter and St Paul, Rotunda of St Martin) should contact the parish office at least four months before the intended wedding.

More information on marriage issues can be found at www.manzelstvi.cz (in Czech).