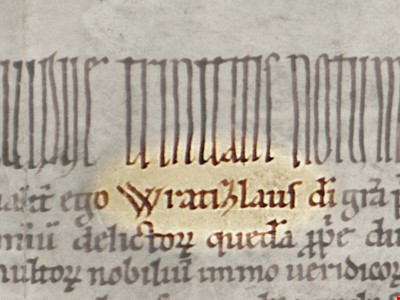 EN Establishment of the Vyšehrad Chapter

At the end of the 10th century, a royal castle was built at Vyšehrad as a counterpart to Prague Castle. After his coming to the throne in 1061, Vratislaus II generously expanded the Vyšehrad residence. While Prague Castle was limited by a narrow rock above the river of Vltava, there was much more space to build a representative palace on the top of the Vyšehrad rock. Additionally, that way Vratislaus escaped his problematic relationship with his brother, Bishop Jaromír (Gebhard), who, like all Bishops, lived directly at Prague Castle.

To strengthen his power, Vratislaus II founded a new ecclesiastical institution in the Vyšehrad residence in the form of a Collegiate Chapter headed by the Provost (the first documented Provost was called Benedict) and equipped it with extensive property and grounds. At the same time, he subordinated it directly to the Pope in Rome, so that the chapter was subject neither to the authority of the Bishop of Prague nor to the Archbishop of Mainz, to whom the Diocese of Prague was subordinated.

The Collegiate church, deliberately dedicated to St Peter, the head of the Christ’s Church, became the main sanctuary of Vyšehrad. The Romanesque basilica was the ideological opposite of the Episcopal temple, the Cathedral of Saints Vitus, Wenceslaus and Adalbert at Prague Castle.

Vratislaus established the Vyšehrad Chapter with his generous foreign policy in mind. He appointed Canons, probably educated foreigners, to negotiate, both with the Papal Curia and with the King of Germany and later Holy Roman Emperor Henry IV, from whom he also received the royal crown.

Both the exemption of the Collegiate Chapter from the authority of the Bishop of Prague and the property of the Chapter were confirmed only by Pope Lucius II in his privilege issued in the Roman Lateran on 11 April 1144. This shows that until that year, the exemption was respected mainly by the will and power of Duke and King Vratislaus and his successors on the Bohemian throne.

Main source: Text written on the occasion of the 950th anniversary of the founding of the Vyšehrad Chapter by PhDr. Denko Čumlivský from the National Archives of the Czech Republic, to whom we would like to thank for his long-term cooperation.

Photo: The direct mentioning of Duke Vratislaus in the copy (i.e. false document) of the founding charter. See National Archives of the Czech Republic, Archive of the Vyšehrad Collegiate Chapter (1130–1523) 4,in: monasterium.net, available online.